I’ve been a pastor for over 30 years. During that time I’ve heard a lot of stories, walked alongside a lot of people in the ups and downs of their lives, and have been blessed to experience the narrative that God is writing in my own.  “23” and Other Stories of Faith is a collection of real stories and faith lessons that I’ve learned and heard along the way.  It is my prayer that they’ll offer hope and encouragement for your life too.

Keep checking back as the stories unfold a post at a time.  If you miss one – check out the archives.  If you like what you read, please sign up to follow the blog, you’ll receive a notification each time there is a new post.

Our wakeup call was for 4:30 AM. The itinerary called it, “Sunrise on the Ganges.”  Yea, that didn’t happen . . . We never saw the sun or much of anything for that matter because the fog was thick and low to the ground. If God’s purpose for this excursion was to experience again the contrast of light and dark – we did. As we walked toward the river we moved deeper into a fog that seemed determined to block out the light.

The Ganges River is a place of darkness; worshipped by Hindus as the most sacred body of water in the world. They believe that it is the embodiment of the goddess, Ganga, the daughter of Himalaya, the mountain god. By bathing in it and drinking the water Hindus believe it will cleanse, purify, and heal them. They also believe that if they dissolve the ashes of cremated loved ones in the sacred water it will atone for past sins and carry them directly to paradise. That’s why important Hindu cremation shrines are located on the Ganges in Varanasi. It is believed that 40,000 human bodies are cremated every year and then placed into the river. Amazingly, the river, polluted with human waste and industrial contaminants, provides drinking water for an estimated 40% of India’s population.

Our riverboat was a simple, ancient, wooden boat, open hulled except for a small covered section at the bow and stern. There was no captain’s wheel – just a hand-controlled tiller. The little engine coughed and sputtered when started with a hand crank. The speed was controlled with a light weight throttle cable like the one on my lawnmower. Rough wooden benches ran along the gunwales. A skipper and first mate (I use those terms very loosely) did the rest of the work, pushing us off from the shore, past the bathers in the filthy river, and into the fog. 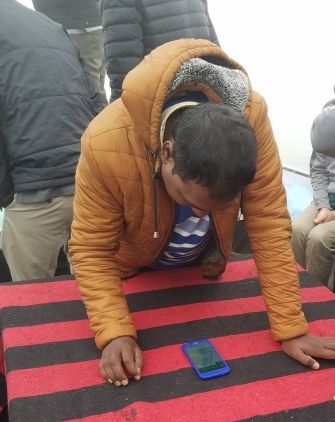 From the very beginning we couldn’t see anything past 8-10 feet. We slowly motored up the river and then turned around to retrace our route. That’s when the fog got thicker. All sense of direction and equilibrium was lost. We were going in circles. We laughed uncertainly. It’s a bit disconcerting to see the skipper leaning over his cell phone looking at Google Maps, trying to find his way home. We gained direction when one of our group members downloaded a compass app on his phone and when some random guy rowed up alongside of us in a much smaller boat, seeking to sell us refreshments, and pointed the way.

As the boat moved turned toward the shore we eased out of the deep fog and into the spiritual darkness of Manikarnika Ghat – the famous Varanasi crematorium. We found it: 25.3108° N, 83.0141° E.  Fires smoldering, bodies burning, a temple of the lost, a monument to hell, death, and darkness.   The darkness was easy to find.